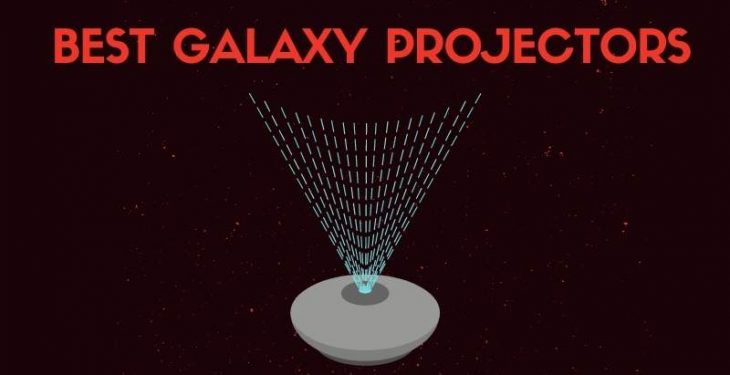 Want to change the ambiance of your bedroom but are too lazy to install LED light strips? We have got you covered with our handpicked list of top 5 best galaxy projectors that you can just plugin and change the mood within seconds.  We decided to stick to a narrow price range so that you don’t need to think about your budget, just pick any of the mentioned projectors and be assured that you cannot go wrong. If you are having a good budget you can also check out these best projectors under $600. 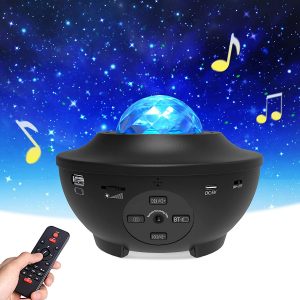 In this static mode, your room will be brightly lit with still color combinations of your choice. It is meant to replicate an ocean of stars that will make you feel like the milky way is your roof and nebula is your neighbor. The standard mode has 10 color choices available and every one of them is designed to suit your different moods.

In this dynamic mode, moving patterns are projected across your room to give a soothing calm feeling like that of ocean waves. You can set the color and speed of motion as per your mood.

This projector’s illumination is dimmable and can be set at 40%, 70%, and 100% brightness. The built-in speaker is loud enough but there is no tuning done for different frequencies which means it has a flat sound profile so don’t expect much there. It has Bluetooth capabilities so you can play your favorite songs wirelessly. It also supports a memory card input.

This projector also has an auto-off timer which means you don’t have to turn it off manually every morning. 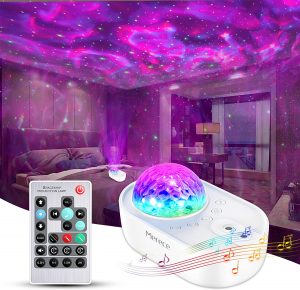 This galaxy projector from merece is almost the same as the first one, just in white. Well, it is cheaper and also has an extra feature to control white noise in its scenic projections. It is equipped to produce the white light in 5 different modes namely: cricket, thunderstorm, ocean, fan, and running water so that you don’t have to wait for nature to enjoy your favorite weather.

The build quality is not as sturdy as the first one but the speakers have some life to them. The bass is enriched in this one though lows are not maintained well. Apart from these add-ons, it has all the standard features from the first pick like Bluetooth-enabled speaker, auto-off timer, and adjustable speed of light pattern in ocean wave mode. It lacks the feature to dim its intensity.

Comparing the first two, you should go with Eicaus if you prioritize build quality and don’t have a budget constraint. If you want better speakers and wish to save a few bucks, go with mereces. 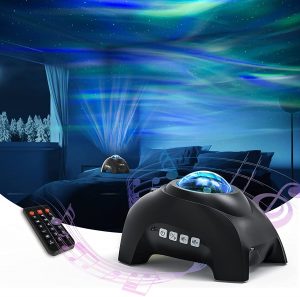 This one is slightly different from the first two picks as it has a unique pattern of lights that can simulate the northern lights and make you travel to the arctic without even stepping out from your bed. Amazon’s choice product does everything the first two did and more.

The Bluetooth speaker is better and you get 8 different built-in soothing sounds to complement the ambiance. Built-in sounds are soft music, morning jungle, stream, summer night, rain, music box, ocean waves, and bonfire. It has 5 different levels of brightness and 5 different speeds of motion of light.

It has 4 different primary colors and 14 different lighting effects. The built-in dynamic effects enable the laser-made stars to blink for a while and then disappear for a while. This makes the lightning effect come to life and significantly distinguishes this projector from a normal LED light bulb. 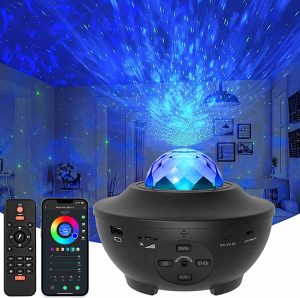 This projector was specifically picked in this list because of the list of features it provides at this price. It does everything you would expect a normal galaxy projector to do in this price range and then it offers a couple of premium features that you would expect from a much more expensive projector

The YOVAKO star projector has 10 different lighting modes and 3 levels of brightness at 30%, 60%, and 100%. It comes with a remote control with which you can set an auto-turn-off timer. It also has a Bluetooth speaker built-in which has a flat sound profile so don’t expect much there.

Apart from these, it also has the support of a mobile application that you can download and pair with your projector to control it via your Smartphone. Once connected to the app, you can choose any color from the entire RGB spectrum, align the timer with your alarm and turn it on/off without a separate remote.

You can also control this projector with voice controls which does not work very well but at this price, it is exceptional that they even added this feature.

It is not capable of producing a northern light effect and the lighting effects that it has are underwhelming in comparison to others listed. 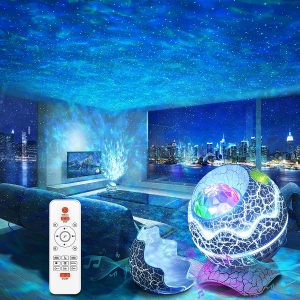 Let us end our list with our most premium picks coming in at 50 USD but trust me the higher price is worth it. For starters, the build quality of this projector is robust and sturdy. Even the remote control has some weight to it and does not feel cheap while operating.

It is equipped with Bluetooth 5.0 which means better connectivity and clear sound quality. It has 14 different color options, 4 brightness levels, and 4 speeds at which the moving light patterns can operate. It also has 19 built-in soothing sounds like forest, ocean, bonfire, rain, morning, and birds. In terms of standard projector functionality, this projector is the best one on this list but also comes with a higher price tag.

The unique selling point of this galaxy projector is not the look it creates on your roof using laser lights but the way it looks just sitting on your bed stand. It is shaped in form of an egg, to precise a dinosaur’s egg. It comes in creamy white color which enhances its resemblance to an egg. Moreover, it has LED decorations on it with a circular bright strip running in the center and crack-like patterns all over it. While turned on, it gives an impression that it is breaking to give birth to some heavenly creature and that’s why it is glowing from the inside.

Overall, if you are willing to trade in some extra bucks and northern lights effect for an awesome-looking dinosaur’s egg because you are Ross, this projector is the one for you.

Do you remember playing a shadow game of making images by using hands on the wall? This is … 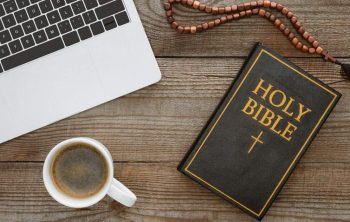 Over the years, the use of projectors in churches has been a growing trend, bringing worship events to … 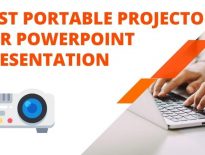